Embark on a fabulous train journey, travelling through the Mettupalayam to Ooty Toy Train that navigates through steep grades before reaching the Queen of Hills, Ooty. Located at the foothills of Nilgiris and the banks of Bhavani River, Mettupalayam is connected to Ooty through road and rails.

Though you can travel by taxi or bus to Ooty, the most recommended mode of transport is the railway service. There is only one direct train from Mettupalayam to Ooty, the Nilgiri Mountain train or the Ooty Toy train. The Nilgiri Mountain Railways that runs the toy train from Mettupalayam to Ooty offers an enchanting travel experience whistling and chugging through the majestic landscapes.

The exclusive train designated by UNESCO as a World Heritage Site in July 2005 is worth a ride to experience the marvellous engineering efforts involved in creating the railway services across the mountainous terrain. The 46km long meter-gauge single track railway became operational in 1908 and has been carrying passengers since then, through 16 tunnels, 208 curves and 250 bridges.

As the toy train had to travel through dense rainforests and steep mountains, a rack and pinion system also called Abt system was designed. The only rack railway in India is believed to have been established by Britishers for their quest to visit a hill station as a relief from scorching heat.


Beginning its journey from Mettupalayam at 7.10 am, the 56136 Mettupalayam to Ooty train takes five hours to reach its destination, Udagamandalam at 12 noon. If you are travelling from Chennai or Coimbatore you have the convenience of boarding the 12671 Blue Mountain Express (Chennai to Mettupalayam Nilgiri Express via Coimbatore) that arrives in Mettupalayam at 6.15 am and connects with the mountain train’s morning departure.

You could even board the bus from Coimbatore which is well connected with bus, train and air services. The train stops at five stations namely Coonoor, Wellington, Aruvankadu, Ketti, and Lovedale before it reaches Mettupalayam.

How to book the Ooty Toy Train Ticket?

You can book your tickets online through Indian Railways website www.irctc.co.in else you can get the tickets at the station. In order to avoid the inconvenience of heavy queue it is recommended that you book tickets online, as during peak tourists seasons, there is a huge demand for toy train tickets. It is advised to book the tickets 2 to 3 months in advance.

Train Class & No of Seats

Watching the steam rise through the thick forests, posing the head out of the windows to feel the pleasant breeze, and gazing at the mind boggling flora, misty mountains and narrows valleys is going to be a majestic experience during the five hour long journey from Mettupalayam to Ooty. 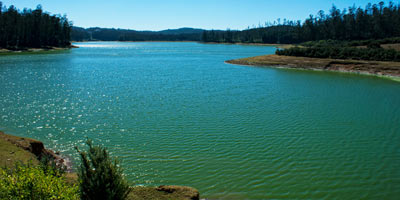